Why did Scott Morrison take so long to call the election? 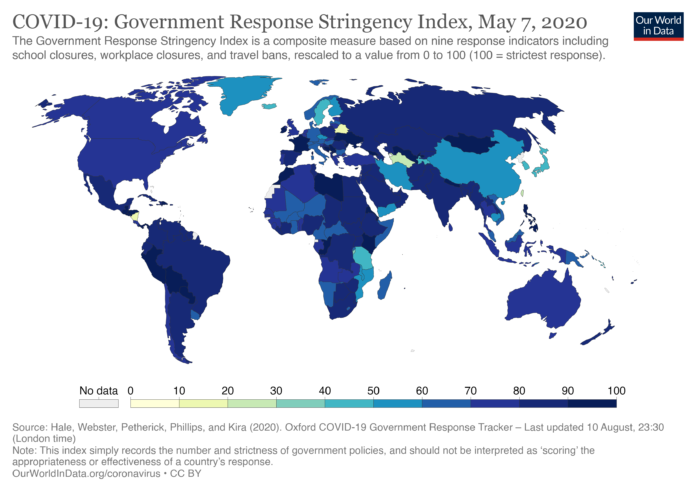 Metropolitan Melbourne entered Stage 4 restrictions from  6:00 pm on Sunday, August 2. The unprecedented circumstances were brought upon by the unabated increase in coronavirus infection numbers and deaths. While these new restrictions may feel extremely harsh and isolating, it is important to remember that many other countries have or are experiencing similar restrictions, so we are not alone in facing this daunting period.

The Oxford COVID-19 Government Response Tracker (OxCGRT) has collected publicly available information on 9 indicators of government response to create the  “COVID-19 Government Response Stringency Index”.  Using this index, countries can be given a score between 1 to 100 which reflects the level of government measures such as school and workplace closures, travel bans, restrictions on public and private gatherings and testing and contact tracing policies.  As of the writing of this article on August 9, Australia has a score of 71.76. It is interesting to note that this is not the highest score Australia has received (that being a 75.93 during the April isolation period), likely due to the Stage 4 restrictions being limited to Victoria. If you are feeling bored at home, the OxCGRT’s website contains a veritable wealth of data on global responses to the pandemic and is well worth for some exploration. An interactive visual representation of this index can be found on their site.

Note: Although this study did not technically happen within the past week, it was reported on by Australian news outlets on Wednesday, so it will be included here.

On July 28, a study was published in JAMA that heralded what could perhaps be the greatest breakthrough in Alzheimer’s research in a decade. The study titled “Discriminative Accuracy of Plasma Phospho-tau217 for Alzheimer Disease vs Other Neurodegenerative Disorders” reported that scientists had developed a new blood test that could discriminate Alzheimer’s disease from other forms of neurodegenerative disease, by using the p-tau217 protein.

Currently, most Alzheimer’s diagnoses come from clinical memory and cognitive impairment assessments but these are often unreliable as it is difficult for doctors to  distinguish Alzheimer’s from other neurodegenerative diseases. Another method is to test for elevated levels of amyloid protein (often found in the brains of people with Alzheimer’s) using PET scans and spinal taps, however, it is very expensive and availability is limited. The blood tests were found to be more accurate than  MRI scans, performing on the same level as  PET scans and  spinal taps. The tests were 98% as accurate as autopsies, which are currently the most definitive diagnostic method.

Even though it is not a cure, this breakthrough means that doctors can identify Alzheimer’s more easily.  This is important in it would not only assist in the managing of symptoms but also in screening participants for clinical trials for new therapies. The researchers have estimated that the test may be available for clinical use in as little as two to three years.

Two explosions rocked the city of Beirut, the capital of Lebanon on August 4. Initial reports pinned the cause of the explosion of fireworks factories, but is now attributed to 2750 tonnes of ammonia nitrate confiscated from abandoned cargo ship MV Rhosus in 2014. The explosive cargo was then improperly stored in a warehouse on the docks for 6 years, despite leaked documents apparently showing that customs officials had inquired a Judge of Urgent Matters on how to dispose or sell the ammonia nitrate at least 6 times between 2014 and 1917.

Even before the explosion, Lebanon had been in a state of crisis. The nation’s economy has suffered from unprecedented wildfires that ravaged its western mountains in October 2019, governmental corruption and economic mismanagement that has been described as a gigantic Ponzi scheme and an 80% devaluation of the lira. All of this has left Lebanon with the world’s third worst public debt-to-GDP ratio and a 25% unemployment rate. Widespread protests against the government had broken out across the country in 2019. The coronavirus pandemic has caused food prices to double in some cases, causing the Prime Minister to warn that Lebanon is on the verge of a “major food crisis”.

A main contributor to many of the issues is in political sectarianism. The countries government is split up by religion with the three main political offices being split between Shia Muslim , Sunni Muslim and Maronite Christian. Such a system has made the country susceptible foreign influence and fostered a system of patronage within each sect.

As of the writing of this article, world leaders are about to hold an aid summit in 3 hours’ time. Official estimates place the damage caused by the explosion at 15 billion USD. On Saturday August 8, between 5000 to 10 000 people gathered to protest against the government, leading to violent confrontations between demonstrators and the police. One officer has been reported dead, allegedly after falling down a lift shaft he was into by protestors and the Lebanese Red Cross stated that it had treated 117 injuries at the scene with another 55 transferred to hospitals.

Why did Scott Morrison take so long to call the election?

The Religious Discrimination Bill has become a widespread topic of discussion recently amid questions raised over the extent to which protections for...
Read more
Feature

Hiroshima, August 6th, 1945. The day the USA drew a line in the sand, a clear divide between the old and new,...
Read more
Arts & Entertainment